Be the first to review this product
Special Price $65.00 Regular Price $105.00
Out of stock
Notify me when this product is in stock
Add To Wishlist Add To Compare

Details
Maharam
MODERN FABRICS SAYS
Any Charles & Ray Eames fabric is a very rare find for us and a cause for celebration! YEAH. Snatch this baby up because it will be gone soon! Light taupe-gray corduroy background with circles a bit larger then a quarter coin. Perfect for any project: upholstery, pillows, purses, wall hangings. 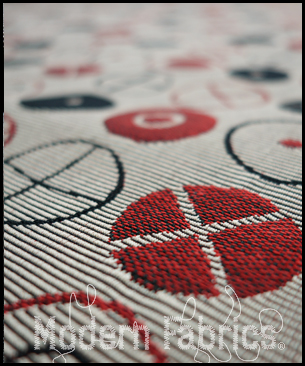 Maharam is my favorite commercial textile manufacturer of them all! I think they are most innovative and rule braking, and since we carry the largest collection of Maharam reclaimed fabrics I get to see a lot of cool fabrics by them. Here is some background as written by Maharam on their website: maharam.com

Maharam was founded in 1902 by Louis Maharam, a Russian immigrant. Through the generations, Maharam evolved from a source of theatrical textiles for costume and set design in the 1940s to a pioneer of performance-driven textiles for commercial interiors in the '60s.

Maharam is recognized for its rigorous and holistic commitment to design as a leading provider of textiles to architects and interior designers. Maharam embraces a range of disciplines, from product, graphic, and digital design to art and architecture.

Maharam textiles are included in the permanent collections of the Art Institute of Chicago, the Museum of Modern Art, and the Stedelijk Museum, among others. Maharam is the recipient of the Cooper-Hewitt National Design Museum Design Patron Award (2007) for its longstanding support of design and cultural initiatives. Maharam Agenda was published in 2011.

ABOUT Charles and Ray Eames

Charles and Ray Eames (1907-1978; 1912-1988, United States) were a husband-and-wife design team whose contributions to architecture, furniture, and photography laid the foundation for American mid-century modernism. Charles Eames studied architecture at Washington University (Missouri) and later become head of the department of industrial design at Cranbrook Academy of Art (Michigan). Ray Eames studied at Bennett College (New York) and later studied painting under Hans Hofmann. In 1940, she attended Cranbrook, where she met Charles Eames; they married a year later, in 1941.

Their work together began with experimental manipulations of plywood, and, in 1946, they exhibited their furniture at the Museum of Modern Art (New York). Herman Miller began to produce their works in the 1950s. Although the Eameses moved into film, photography, and print, they designed furniture into the 1970s. Their timeless work continues to be influential. Read more on the Eames Foundation website: http://eamesfoundation.org/